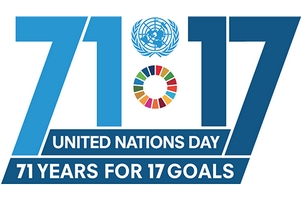 The reception started with a welcoming word from the Director of the UN Information Centre Vladimir Kuznetsov, followed by a short speech from the head of the UN Country Team in Russia, Director of the Regional Support Team for Europe and Central Asia UNAIDS, Vinay Patrick Saldanha. In his speech Mr Saldanha congratulated the guests on the UN Day and emphasized that not only the UN, but every person in the room bore the responsibility to contribute to the 17 goals of sustainable development through her/his actions and commitment. After this, the Deputy Director of the Department of international Organizations of the Ministry of Foreign Affairs of Russia Alexander Alimov greeted the guests as well with an official address from the Ministry of Foreign Affairs. To mark the end of the official part of the reception a video message from the designated Secretary General Antonio Guterres was broadcast.

24 October has been celebrated as United Nations Day since 1948. In 1971, the United Nations General Assembly recommended that the day be observed by Member States as a public holiday.