I. Goals and objectives

The main goal of the Program is assisting in access of Small and Medium Enterprises (SMEs) to modern technologies for providing of sustainable economy growth of participating countries.

Achievement of the goal is planned via consolidation of Russian science & technical potential for establishment technology partnership of participating enterprises with UNIDO support as intermediary.

In the process of the Program development it is presumed assisting in identification and creating of SME supporting instruments for getting of financing from international Funds, Banks and Development Corporations.

The Program is in early stage of framing technology basis for technology partnership in the way of Technology Platform of Russian enterprises and Conception for specialists training.

Priority industrial Clusters of the Program are identified and forms of assisting to technology partnership development is in the process of identification.

Simultaneously with industrial basis framing the initial Russian projects for priority clusters of Technology Platform has been identified for BRICS and BRICS/Africa.

Key directions of priority industrial clusters of national programs of emerging economies are mainly coincide with each other and can be system-defined in general format:

Industrial Innovation club is framed from representatives of Russian enterprises practicing or planning activities in BRICS countries and in African region.

Representatives of Russian state sector are participating in the Club activities including regional department of Ministry of economic development, state financial funds and instruments for efforts consolidation in the frame of public-private partnership. Non commercial technology and innovation associations can be involved in the Club as well.

The core of Technology Platform by cluster vector is initiative proposals of Russian enterprises—Club members for assisting of industrial development BRICS countries.

Here is below the sample of scheme for Technology Platform BRICS is introduced with the list initiative proposals of Russian enterprises for priority industrial Clusters.

«Russia—Brazil Partnership in Technology and Innovation for development of SMEs with expanding to all BRICS countries»: Russia – South Africa Sub regional Vector 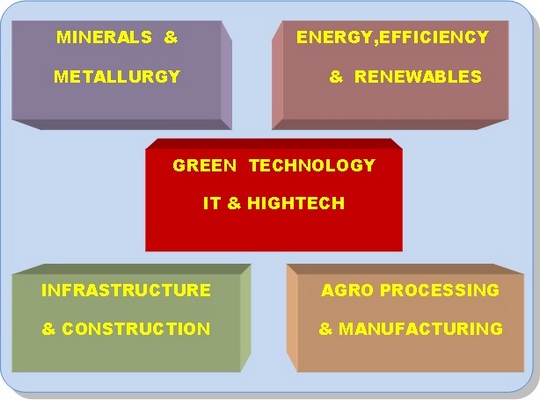 In accordance with Information letter of UNIDO Center for international industrial cooperation in the Russian Federation of 22 December 2012 the Industrial Innovation Club is beginning to be framed on a voluntary basis in the way of expert conceptual and project coordination.

Industrial Innovation Club is Technology and Innovation resource of UNIDO Center for international industrial cooperation in the Russian Federation and it is carrying out practical activity via Technology Platform bring framed by the Club.

Technology Platform is Innovation Instrument of Industrial Innovation Club for assisting to implementation of regional and cluster Conceptions and Project proposals in accordance with goals and objectives of the Club.